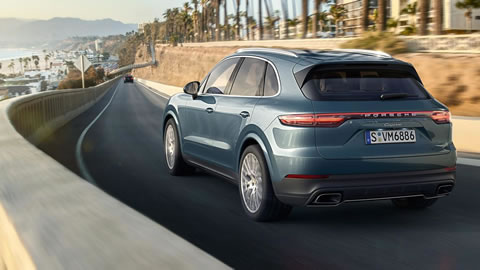 The Cayenne generation of engines has been redeveloped completely from scratch and they now offer even greater power and torque. Combined with a further improvement in efficiency.

Let's start with the first two new creations: the 250 kW (340 hp) turbocharged V6 engine in the Cayenne and the twin-turbo V6 engine in the Cayenne S, which produces 324 kW (440 hp). On both drive units, the turbocharger is positioned in between the cylinder banks. This reduces the distance that the exhaust stream has to travel to reach the respective turbo – delivering a more rapid response. The engines are also equipped with VarioCam Plus: a system that adjusts the camshafts and valve lift.

For efficiency, all engines also come with electrical system recuperation, thermal management and the auto start/stop function with coasting function. 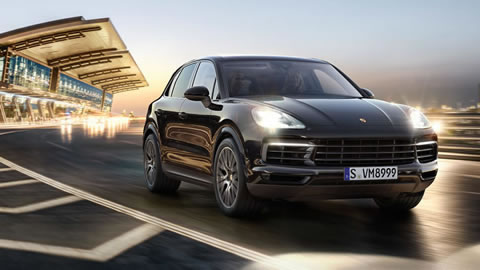 New to the Cayenne is the integrated Porsche 4D Chassis Control. It centrally analyzes the driving situation in all three spatial dimensions, e.g., pitch, roll and yaw. From this data, it computes the optimum driving states and synchronizes all chassis systems in real time.

Adaptive air suspension
Adaptive air suspension enhances both driving dynamics and comfort at the same time. The use of three-chamber technology makes it possible to enjoy an even better combination of comfort and sportiness because the spring rate is adjusted to suit the driving mode and situation. The air suspension also features a self-leveling function to keep the vehicle level constant, PASM and a ride-height adjustment capability – so that you can actively vary the ground clearance as the need arises.

Porsche Dynamic Chassis Control (PDCC)
PDCC is an active roll stabilization system. It registers the lateral inclination of the body induced by cornering from the very outset and acts to suppress it. The system also reduces the lateral instability of the vehicle on uneven ground. What's new is the inclusion of electromechanical anti-roll bars. These respond faster than their hydraulic equivalents and work more efficiently. The result: improved performance. 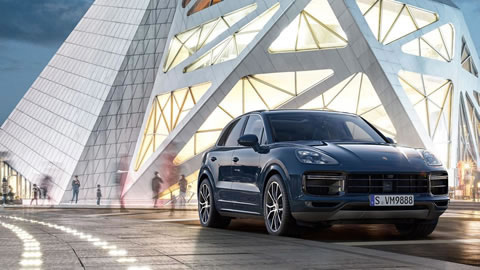 The customary identifying features are there to be seen, including the strongly emphasized front panels, the long, downward sloping hood and with its power dome, and the characteristic three-piece air intakes, which are even larger and more dominant. 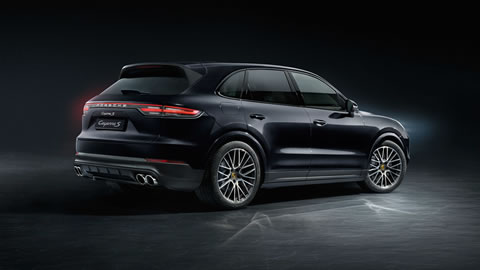 The front end is new and commands a very imposing presence. At the side, the sharpened contouring of the roof, which descends sleekly all the way back to the roof spoiler, catches the eye. So do the newly styled doors and new wheels up to 21 inches in size. The rear has been completely restyled. Attention is drawn directly to the succinct light strip, which stretches the full width of the rear. The taillights are designed with cutting-edge, precise LED technology. 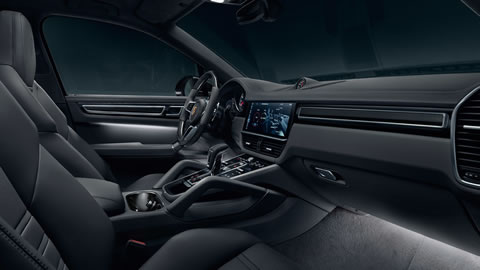 Exquisite, sporty, ergonomic. Not least thanks to the low-profile, conspicuously wide dashboard and the ascending center console for swift hand movements from the multifunction Sports steering wheel to the gear selector.

The interior is practically built around the driver, and is absolutely driver-centric as a result. The same applies to the seats: Sporty with a capital ‘S’. And it also applies to the newly styled rear seats, each one of which induces motorsport sensations. Without having to sacrifice comfort.

New in all Cayenne models: the Porsche Advanced Cockpit control concept. The center console with Direct Touch Control has a surface in glass look featuring touch-sensitive buttons for direct access to the most important functions. In between: the compact gear selector. Above the center console is Porsche Communication Management (PCM), which features a full-HD 12-inch touchscreen display and includes an online navigation module for intuitive operation. Behind the multifunction Sports steering wheel is the new instrument cluster. To the right and left of the customary Porsche analog tachometer are two high-resolution display screens that visualize virtual instruments, maps and other information as required.

Available as an option, the colored ambient lighting – new in the Cayenne – enriches the interior with clever light accents. You can choose from a variety of color schemes for any mood and even change the light intensity to suit your preference.

All models impress with strengths typical of every Cayenne: spaciousness, great versatility and an array of carefully selected materials. 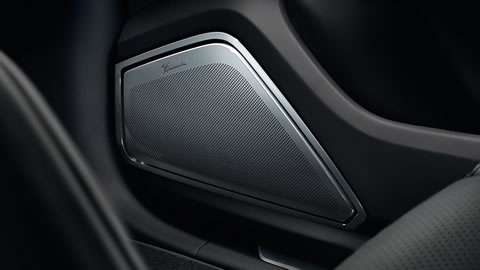 All loudspeaker housings are perfectly matched and deliver superior bass foundation, definition and precision. The result is a natural and richly textured spatial sound, even at top volume. Particularly impressive is the new 3D sound experience, created by the loudspeakers integrated into the roof pillars and by the use of a special Auro 3D algorithm. The Sound Enhancer optimizes the quality of music in compressed data format. The system also blends impeccably into the overall interior aesthetic thanks to the Burmester® loudspeaker trims in the doors. 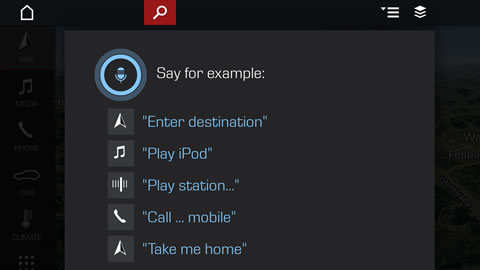 Services and smartphone apps*
With Porsche Connect, you have access to useful services and functions that can help you before, during and after your journey in your Cayenne.

Ready to assist is the new Voice Pilot, your online voice control service, so that you can keep your eyes on the road and traffic at all times. Simply say where you want to go. A sightseeing attraction at your destination, for example. Voice Pilot understands without you having to enter address details.

*The models featured in this publication are approved for road use in Germany. Some items of equipment are available as extra-cost options only. The availability of models and options may vary from market to market due to local restrictions and regulations.

Apple® CarPlay
Thanks to its support for Apple® CarPlay, Porsche Connect enables you to use the apps of your iPhone® even when you're in your Porsche. This means that apps such as 'Telephone', 'Music' or 'News' can be used straightforwardly and safely – via PCM or with Siri®, Apple's voice recognition interface.

My Porsche
Every Porsche can be configured to your preference. Porsche Connect is the same. My Porsche therefore enables you to personalize and use many of the Porsche Connect functions and services in a way that suits your particular needs. 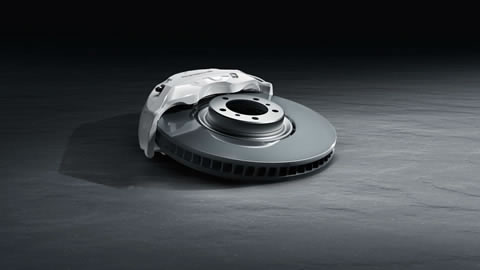 The innovation behind this brake is the first ever combination of a cast-iron brake disc with a ceramic coating (tungsten carbide).

By comparison with an equivalent cast-iron brake disc of conventional design, PSCB offers a 30 % longer service life for the brake pad and brake disc. It comes fitted as standard to the Cayenne Turbo and is available as an option for all other Cayenne models. 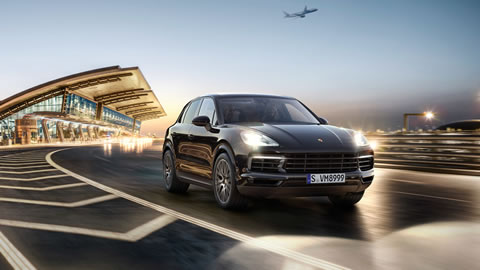 Night Vision Assist provides the driver with information even beyond the range of the headlights. An infrared camera detects pedestrians, deer and other large wildlife before they are illuminated by the headlights. In combination with PDLS Plus, the marker light function briefly flashes the headlight at the pedestrian on the curbside or in the driving lane three times to alert the driver's attention. 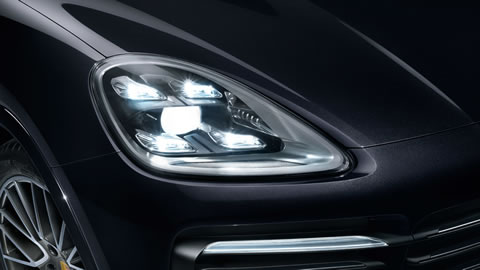 The LED matrix beam strategically deactivates specific segments of the permanent main-beam cone. 84 individually controlled LEDs adapt to the situation ahead by switching off or dimming accordingly.

Porsche Riverside has a 2019 Porsche Cayenne for sale